skip to main | skip to sidebar

Let me put it this way

If anyone finds part of the newspaper in Scout's diaper in the next few days, I'm not going to be all that surprised.
Posted by Sarah at 6:00 AM 2 comments:

Out for a drive with Rob and Scout:

Me (to Scout): I love you so much. I feel so full--I am in the car with two people I am completely in love with. 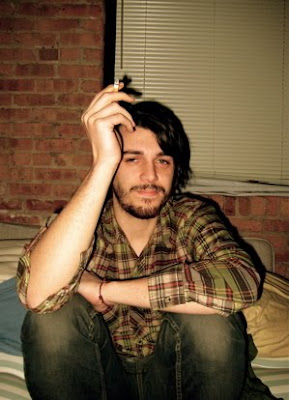 Last night Liz, Rob, Rob and I went to see Margot & the Nuclear So and So's at the Great American Music Hall in San Francisco. Liz and her Rob got me the tickets for my birthday, and we had an excellent dinner at Baker & Banker beforehand.

As you may have guessed, we don't go to shows very often these days. Or dinner. Or movies. Or the shower...well, to be fair, that's just me. Rob manages to stay pretty clean on a daily basis. Anyway. It was a fabulous night and the band was incredible. Their music has been described as chamber pop, but last night they were pretty stripped down and more folk rock. The lead singer, Richard Edwards, came out alone for the encore and did three songs with just his guitar. I now want to listen to their music all day long, Google them and read interviews, obsess over their ages--I still think all musicians, athletes and actors should be older than me, but I've found it doesn't work that way--and just generally stalk them.

It's a good thing I have so much extra time in my day for activities like this. Between work, taking care of the baby, grocery shopping, showering and making dinner, let's take a guess at what will be the first thing to go. I'll give you a hint. It's showering.
Posted by Sarah at 8:56 AM No comments:

From an article in the New York Times:

[[...nursing mothers will not be allowed to use their tax-sheltered health care accounts to pay for breast pumps and other supplies.

That is because the Internal Revenue Service has ruled that breast-feeding does not have enough health benefits to quality as a form of medical care. ]]

[[A study released this year by Harvard Medical School concluded that if 90 percent of mothers followed the standard medical advice of feeding infants only breast milk for their first six months, the United States could save $13 billion a year in health care costs and prevent the premature deaths of 900 infants each year from respiratory illness and other infections. ]]

It's so funny, because just the other day I was thinking, really what is the difference between the IRS and the medical research community? I mean...can you think of anything?
Posted by Sarah at 8:04 AM 1 comment:

What the hell is a yoga hug?

Tonight I went to yoga, while Rob stayed home and watched Scout via the video monitor. When I got home, he was in the kitchen.

After a few moments he broke away and narrowed his eyes.

"What was that for?" he asked suspiciously. "Was that a yoga hug?"
Posted by Sarah at 10:12 PM No comments:

Did they not have the budget to hire a copy editor?

I just watched the trailer for Clint Eastwood's new movie Hereafter, and whoa. Major typo in the text of the trailer--they spelled beginning "begining". I would link to it, but I can't find it anywhere online--the typo isn't in the official trailer. How do you make a mistake like that when you only have about 15 words to read?
Posted by Sarah at 9:33 PM No comments:

So, this is embarrassing, but I have recently discovered (by way of others pointing and laughing at me) that I don't pronounce the word "ancient" like a normal person does. Apparently, the rest of you say aint-shunt. Me, I say aink-shunt. I'm not sure why. I called my parents and made them pronounce the word. Turns out I didn't learn it from them.

I felt slightly mollified when I read in Merriam Webster's that there are two ways to pronounce ancient; both my way and everyone else's way are legit. But no one else really seems to use my way. Where did I first hear this word?

Rob suggests that it was taught to me by my ank-cestors.
Posted by Sarah at 2:13 PM No comments:

Books I Just Finished and Will Now Recommend to You